Using Sprott's PM funds to get physical at spot

Another month, another redemption from Sprott's PHYS gold fund, 29,761oz. SPPP also had 2,424oz of platinum and 5,539oz of palladium withdrawn. As indicated last month in this post, this activity is arbitrage driven and only occurs in these funds, and not PSLV, because they trade at a discount to their net asset value (due to a lack of investor interest).

Jesse is the only other blogger I know covering Sprott's funds and he has a different explanation, that it is due to "the mispricing of gold bullion and the tightness and leverage behind the scenes in the physical gold market". I disagree with him because as the chart below shows, the redemptions in PHYS don't occur when their is no arbitrage profit to be had (that is, when PHYS trades at a premium, see here for an explanation of the chart). 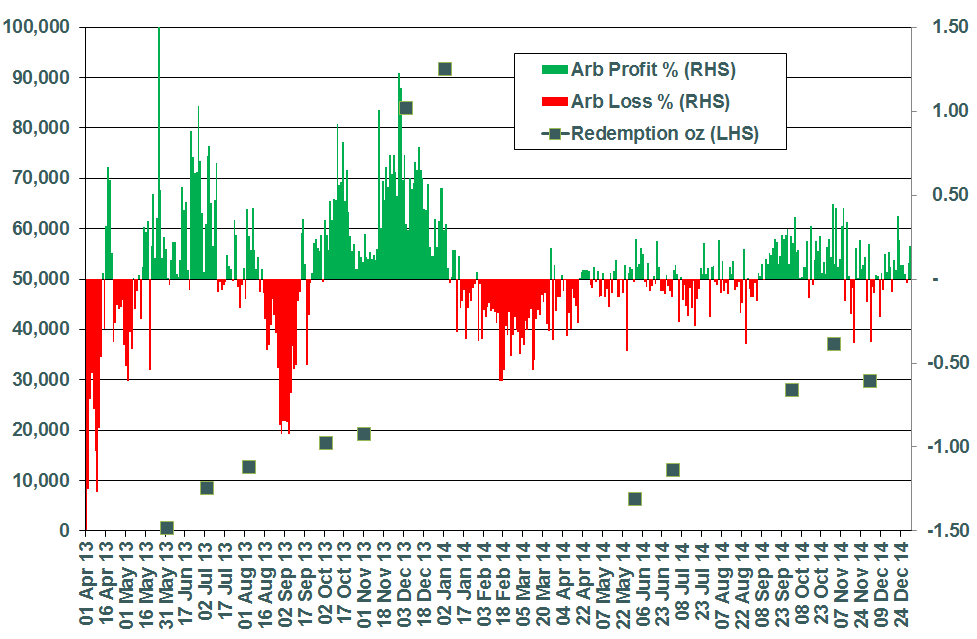 I find it hard to believe that the bullion market's tightness just happens to correspond with PHYS premium/discount patterns. Also, they are only taking out a tonne of gold once a month, which would hardly help at all.

I think it is worth pointing out that the redeemability option for Sprott's funds make them a better investment than totally closed funds like the Central Fund of Canada, as the capability for NAV discount arbitrage means that there is a cap on how big the discount will get. Compare that to the minus 10% discounts the Central Funds are currently at.

Jesse also notes that PSLV's "cash levels have fallen below one million. There is going to be a secondary offering to bulk up those cash levels some time this year." Whether this occurs will depend entirely on PSLV's premium getting to staying to around 5% in my opinion. In this post I got a confirmation from Sprott "that they would not do a deal that would have a material impact on PSLV’s premium." On the chart below I've pointed out where two secondaries occurred in the past on PSLV's NAV chart. 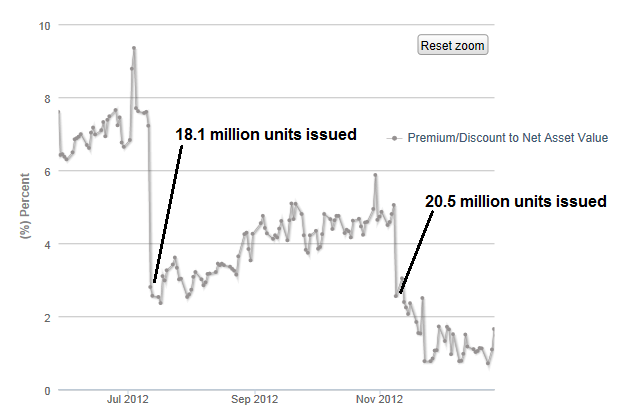 You can see that a secondary results in a hit of 3-4% to the premium. With the premium currently sitting around 1% Sprott isn't going to do a secondary as that would push PSLV into a discount: certainly a "material impact". You may then ask what happens if the cash goes negative, surely they have to raise more cash. Correct, but they can do that by just selling metal from the fund, just like GLD and SLV do to pay their fees, instead of by raising money from issuing more units. The chart below shows the historical cash balance of the three Sprott funds. 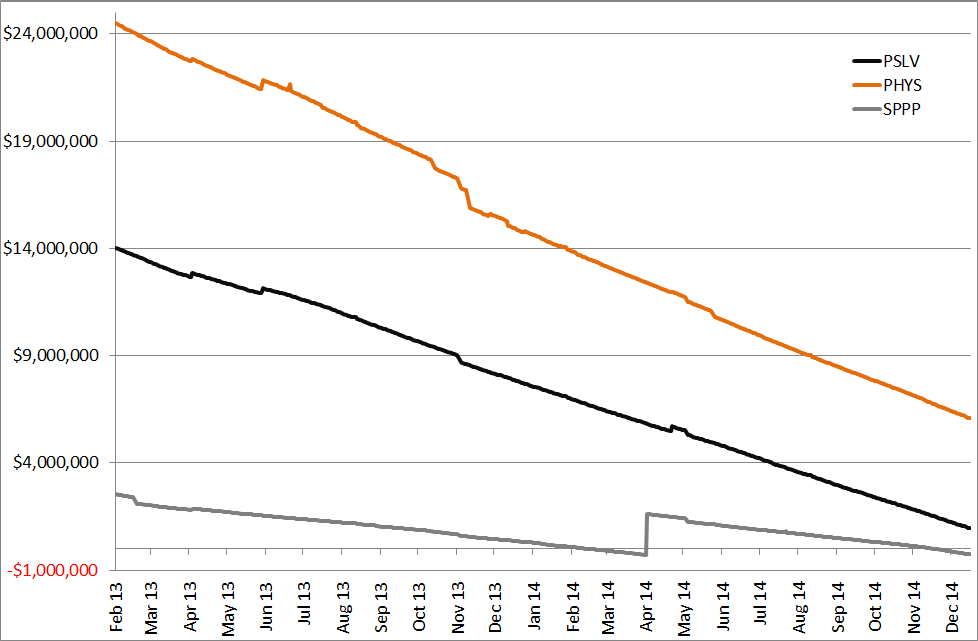 You'll note that SPPP went negative in March 20014 and it wasn't until late April that the fund's cash was topped up - by a liquidation of 600oz of platinum and 1400oz of palladium. Given SPPP is currently negative to NAV and negative cash, another liquidation will occur shortly.

At current burn rates PSLV's cash will go zero mid-February. Based on SPPP behaviour, Sprott should be willing to fund the fund for a month or so but if the premium doesn't get up to 5% then I'd forecast around end of March they'll sell silver from the fund to top up the cash.

So we have a situation where Sprott funds are unlikely to get too big a discount, nor a premium above 5%. This does create an opportunity for the patient investor will a bullish view to buy physical at spot. Just buy Sprott's funds when their share price dips below NAV and then wait when they get to a premium and sell them and use the proceeds to buy coins/bars. PSLV has presented that opportunity three times in the past two years. The strategy is more problematic with PHYS, which seems stuck in negative - you'll probably have to wait for gold prices to recover and thus investor money to flow back into PHYS bidding up its shares relative to NAV. The risk is that will also correspond to a stronger market for coins/bars so premium may also rise, but I don't think they will initially rise too much beyond what you should be able to get out of PHYS when investors get bullish on gold again.
Posted by Bron Suchecki at 19:48