Norcini: Gold is not in backwardation

In my last post I was not saying that what we see now on COMEX and with GOFO is not important – remember the mugger in Crocodile Dundee still had a knife – just that his switchblade is small compared to Dundee’s much larger “full” backwardation knife.

There is a lot of confusion about the definition of backwardation. Here is a quote from the Dummies series of books:

"When a market is experiencing backwardation, the contracts for future months are decreasing in value relative to the current and most recent months. The spot price is thus greater than the front month, which is greater than future delivery months."

Note their use of plural – "contracts" and "futures months" - as these other links also do, from the first page of a google search on "definition backwardation":

Wikipedia - "The resulting futures or forward curve would typically be downward sloping (i.e. "inverted"), since contracts for further dates would typically trade at even lower prices."
McClellan Oscillator - "Backwardation means that forward contracts are priced lower than nearer term contracts, or spot"
Investopedia - "Backwardation is the same as inverted when futures prices are lower than spot prices."

This is what I understand by backwardation when one uses that word in a general sense about a futures market. Having said that, I think it is valid to talk of a specific month being “in backwardation” even if that is not exactly a precise use of the term. What I have a problem with is describing what we are currently seeing in gold as a general backwardation and playing this up as a sign of the failure of the fractional reserve bullion banking system. It is not.

Last word on this I'll give to Dan Norcini:

The post is worth reading in full because he explains the need to look at current bid/ask rather than last price for the further out contracts due to lack of liquidity and the difference between backwardation and the basis (or strong basis as he calls it when spot is above futures). He also makes the following statement:

"When we do however see a STRONG BASIS PLUS a BACKWARDATION STRUCTURE ON THE FUTURES BOARD, then we have the real deal."

I covered similar ground this in 2010 post, saying that that occasional "backwardation" in the shorter months is just the start, or first sign, of a breakdown in the system. Calling what we see now in gold as backwardation proper overstates the phase we are in.

If gold is mostly monetary with only a little commodity-like nature, it is therefore best analysed as a currency and in that respect, no one talks of currencies going into backwardation or contango, they just have different interest rates and that differential might drive a carry trade if the difference is big enough. FT Alphaville has done a whole series on this more "financialised" view of gold.

Regarding negative GOFO (which reflects the interest rate differential between USD and XAU), my current view is that it is reflecting the shift by speculators to the short side - more shorting results in more demand to lease gold, which drives up the lease rate (thus GOFO goes down). I have read that liquidation by specs out of long positions has also restricted supply of gold to lease (as the gold has been sold to those unable or unwilling to lease their gold out) and seen comments that increased physical demand has resulted in more metal being tied up in the value chain, so that results in more demand for leasing (or inventory to hedge).

So I think there is a case to say that negative GOFO as more driven by tightness in the gold leasing market. Note that shortage in the borrowing and lending market does not have to coincide with a shortage in the buying and selling market. Holders of gold may be willing to sell it (so price is low), but at the same time those continuing holding it (or the new people buying it) may not willing to lend it (so lease rate is high).
This is why it is logical for Dan Norcini to say that the structure of the futures market is not exhibiting "a true supply shortage" while at the same time we have negative GOFO and some futures contracts below spot.

So this development in leasing is probably what has driven GOFO negative, which, as Keith Weiner notes in this post, is then synced/transmitted to the futures markets by arbitrage (and has a very compelling combined chart of GOFO and the basis to prove his point). Therefore I think we are currently seeing is more a liquidity squeeze on the bullion banks, rather than a full blown distrust in them by holders of unallocated or shortages of physical (a price squeeze).
A real gold bank run will manifest itself in the wholesale markets for 400oz bars. When I see them attracting a premium and/or being difficult to source, or bullion banks desperately bidding on the Perth Mint's refining output, then we "have the real deal" as Dan says. I will let you know.
Alternatively, just watch Bullion Vault and Gold Money - which are backed by 400oz bars and which deal in that market every day - for reports of difficultlies in getting 400oz bars and restrictions on how much gold can be bought, and/or if they start to add on a "special" premium to their spot price.

Don't be complacent however. What I'm talking about above is the end of the line and things can unravel quickly - a liquidity squeeze can turn into a price squeeze - so keep your gold close or stored with non-banks, like the Perth Mint, who don't engage in fractional reserve and maturity transformation activities.
Posted by Bron Suchecki at 15:31 9 comments: 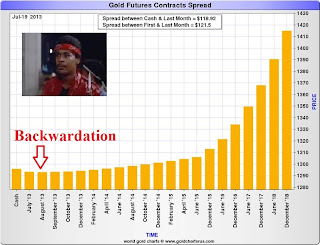 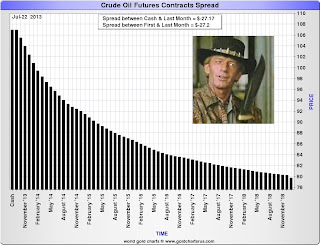 (apologies to the screenwriters and thanks to Nick for the charts)
Posted by Bron Suchecki at 08:42 10 comments:

Email ThisBlogThis!Share to TwitterShare to FacebookShare to Pinterest
Labels: Backwardation

Gold is a pure Epsilon/Narrative asset

I came across this gem of a blog from a reader sending me Mauldin Economics' latest.

I think I could argue the case that gold is almost all Epsilon and little Alpha or Beta, because it is a Monetary asset, because of its massive stocks to flow ratio. As I said here "It is actually supply - the withholding of supply - that matters most." What those holders think matters, and that "think" is what the blogger calls a Narrative.

What we see going on in the goldbug internet is an attempt to construct a Narrative around gold. However, as the blogger says, it is not necessary for the Narrative to be true, "it is only important for a Narrative to sound truthful." Truth is not relevant because the point of the Narrative is to serve the interests of the powerful/those who are communicating it. How true - truth doesn't matter as long as it generates clicks and sells newsletters and coins.

It seems my, at times, crusade for truth in the blogosphere is in vain because what matters is "the more Common Knowledge in play at any given time, the more that market behaviors will be driven by the rules and logic of the Common Knowledge Game than by fundamentals or traditional factors."

Certainly I would have to concede that the current goldbug Narrative (a group of various memes) is all pervading in the gold blogosphere and I'm not really making a dent. There is a catch however. What the goldbugs don't realise is that their Narrative is not the Narrative that the rest of the world is using. Indeed in this post the blogger says that gold doesn't have a Narrative:

"In some periods of history gold is money. In other periods of history gold is not. But gold is always something, and that something is defined by the Common Knowledge of the day. To be an efficient gold investor in any period, I believe it’s crucial to identify and measure the relevant Narrative that is driving the Common Knowledge regarding gold. Only then can one construct an informational surface that predicts how the equilibrium price of gold will respond to new information ... There is no stand-alone Narrative regarding gold today, as there was in 1895. Today gold is understood from a Common Knowledge perspective only as a shadow or reflection of a powerful stand-alone Narrative regarding central banks, particularly the Fed … what I will call the Narrative of Central Banker Omnipotence. Like all effective Narratives it’s simple: central bank policy WILL determine market outcomes."

The result is that those who operate under the blogosphere Narrative will make the wrong decisions:

"You may privately believe that J.P. Morgan is still right, that gold has meaning as a store of value. But if you participate in the market on the basis of that belief, then you will buy and sell gold in an incredibly inefficient manner. You would be a smart gold investor in 1895, but a poor gold investor today."

This is a challenging statement for goldbugs - it doesn't matter if you think gold is a store of value, or if it should be one, what matters is what most people think gold is. I first came across this idea when reading The Social Construction of Reality (see this blog post of mine for background on this idea). When making investment decision what matters is what is, not what ought to be. I think most blogosphere Narratives are about the Ought, not the Is. That's fine, just don't buy and sell on that basis.
Posted by Bron Suchecki at 16:16 12 comments: