Below is a chart Nick of Sharelynx has been working on to show how much of a bubble gold and silver are in (or not).

Note that the x-axis does not have time on it because each bubble had a different timelength (some of the bubbles are 20 years, others 5 years). This does skew/stretch the time, but Nick's emphasis with this chart is more on the percentage growth factor rather than how long it took to get to those bubbles. 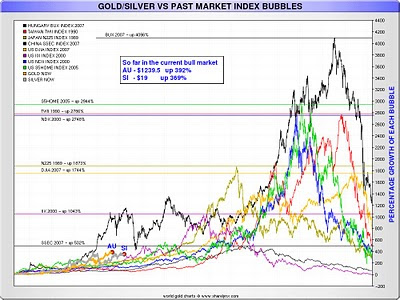 In an otherwise good analysis of GLD (Precious Metals ETF Alchemy
GLD – the new CDO in disguise?) and building on Catherine Fitts’ Precious Metals Puzzle Palace Hinde Capital (as does Ms Fitts) gets it wrong on leasing (see slide 18). A bit of a problem considering that "GLD has encumbered gold in it" is one of his key points.

In the case of lenders supplying actual physical bars (usually only be Central Banks) because it is understood that leased metal will be "used" (be that in a physical operation like a jeweller or mint, or for sale to create a short position), the contract cannot practically require the return of the same physical bars that were lent (ie the same bar numbers). If the lease contract was worded on a secured basis (most likely where the borrower is a jeweller or mint) the security would have to be against the general gold stocks of the borrower rather than the bars originally supplied as it is understood that the original bars are melted or sold.

Where lease contracts specify the return of physical at the end of the lease, it is acceptable to settle with any LBMA bar at maturity, with any ounce difference (due to the variability of 400oz bars) settled via cash.

I note that Hinde Capital avoids the “they don’t have the gold” claim. That is an issue I will post on another time.
Posted by Bron Suchecki at 17:33 5 comments:

Email ThisBlogThis!Share to TwitterShare to FacebookShare to Pinterest
Labels: How the industry works, Ultracrepidarianism

See the document below for a list of all the silver ETFs and online products.

See below for an analysis of gold ETFs and other custodial products.

Further to my blog on the Cooper Review into Super and the recommendations on Self Managed Super Funds, see the 4 August 2010 press release below from ANDA:

The Australasian Numismatic Dealer’s Association (ANDA) says the announcement by the Federal Government that Self Managed Super Funds can continue investing in numismatics, as long as certain guidelines are followed, comes as a relief to many thousands of SMSF Trustees nationwide.

Mr Robert Jackman, Vice President of ANDA says: ‘I’ve been inundated with phone calls since the announcement was made last Friday. The reality is that many thousands of people would have been adversely affected if the Cooper recommendations on numismatics had been implemented. The vast majority of SMSF Trustees only invest in numismatics because they deliver reliable and attractive investment returns.

‘What’s more, the majority of investors already abide by most of the guidelines which ANDA has formally developed with the assistance of the Self-Managed Super Fund Professionals’ Assocation (SPAA). Those who don’t will be forced to adopt better prudential practices, which can only be to the benefit of the industry as a whole.’

ANDA has worked closely with SPAA during recent months, and expects to continue a consultation process on SMSF guidelines which ever party is elected to Federal Government. All three main parties have rejected the Cooper Review recommendations on collectibles for SMSFs.
Posted by Bron Suchecki at 16:59 No comments:

The Social Construction of (Gold) Reality

I have a book in my library called The Social Construction of Reality. Its basic thesis is that reality is socially constructed, or to put it another way, reality is what people believe it is. For example, if you moved to a new town and a rumor was circulated that you were an axe murderer, then you can imagine that people would avoid you, police would monitor you and if there was a murder, you would be an immediate suspect. Even though it was not true, you would in effect be experiencing the life of an axe murderer, at least in how people related to you. For you it would become reality because the social group believed it to be true.

My contention is that if the social belief is that paper gold is as good as physical gold then for all intents and purposes it is. As a result the basis reflects that and does not go into backwardation because people are accepting paper gold bids for their dollars. Saying this does not mean I condone it, but while the social belief continues, what the real “level of physical gold's bid for dollars” is does not matter regarding price.

There is little proof I have for my claim that we are still in phase two of the Degrees of Distrust as the gold market is opaque by nature. One fact I do have is the recent revelation by the Financial Times that the 346t of gold for the BIS swap “came mainly from investors' deposit accounts at the European commercial banks”. That is 346t of trust by those investors and indicates there are a lot of people who still believe in the system.

I can't 100% sure where we are at, but would caution against too much optimism. If we are still in phase two then a lot of education is still called for. I think the mass market is still not into gold in any major way and when it does it needs to be directed into products that take real physical off the market. We have to ensure investors are properly informed, that they understand the true "gold reality". That the Chimps turn into Champs, not Chumps.
Posted by Bron Suchecki at 20:03 1 comment: