Gene Arensberg has a good post up on the rare occurrence of COMEX Producer/Merchants category going net long. He sees it as a bullish sign but I would suggest another interpretation which could be more ambivalent.

Gene notes that the producer/merchant "class of traders is dominated by actors who are hedging price risk of their own physical or financial exposure to precious metal, so they are usually more short than long futures" and that it includes "producers and miners, refiners, large jewelers, large bullion merchants". He also observes that for most of the time this group runs at around 160,000 contracts (circa 500 tonnes) short (see the chart below from Gene's site). 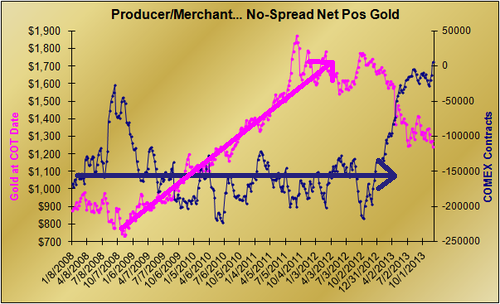 Now the interesting this about this is that this group stays pretty much consistently short right through a huge bull run in gold, in pink. Don't you think that is unusual? As the losses mounted, wouldn't they have lightened up? How to account for this behaviour logically?

The key is, as Gene says, that they are hedging their own physical. All of the types mentioned -  miners, refiners, jewellers and bullion dealers - have a lot of gold in the working inventories of their businesses. They own this metal (are long) and thus go short to hedge themselves. Their business is about buying gold and transforming it into another more valuable product and then selling it. They are not interested in making money on the gold price itself.

Indeed, if they weren't hedged then as a group holding around 16 million ounces they would have lost around $11 billion dollars in the drop from $1900 to $1200. I'm pretty sure you'll agree that they are unlikely to be making so much profit making coins/jewellery or as coin dealers to wear that sort of loss.

My explanation for the reduction in shorts from 160,000 to 27,000 in late 2008 is that the financial crisis caused an unprecedented surge in retail demand for gold. The industry was not geared up for that sort of volume so inventories were run down, resulting in a coin premiums surging. As the industry geared up and put on extra shifts etc the producer/merchants were able to restock and hence we see their short position increase again.

Continuing with this inventory based analysis, it suggests the interpretation for the 2013 reduction in short positions to 6,000 long is that the industry is running down its inventory. In 2008/09 the inventory run down was due to a demand surge, but was only temporary. In 2013 the run down has persisted. An explanation for that is that demand and business has dried up - if you aren't selling as much product then you don't need to hold, and can't justify holding, as much working inventory as you used to.

Consider that during 2006/2007 the producer/merchant short position hovered between 50,000 and 100,000 contracts (see this chart, which goes back a bit further than Gene's). The 160,000 average that Gene mentions is from 2009-2010-2011, which is the bull run in gold. An interpretation is that the extra demand during that bull run resulted in the industry needing to run higher inventories, so we see another 60,000+ shorts being added. With the $1900 bust, maybe the industry as a whole got stuck with higher than normal inventories so worked them down to their average of 75,000.

What is interesting is that the rapid reduction from 75,000 short to 6,000 long started after the April 2013 price smash. That event certainly knocked sentiment from the market in the West. It resulted in cash for gold scrap business drying up (therefore less metal tied up in inventories by dealers and scrap merchants) and if you look at US Mint gold coin sales, they drop right off from that point as well, so again coin dealers etc have reduced inventory needs.

To further back up this analysis, consider that US Mint silver coin sales have not reduced like gold and coincidentally the silver producer/merchant short silver position shows no reduction like gold as the silver market is still strong.

So I'd argue that the producer/merchant position is just reflecting the lack of Western interest in physical gold investment (as also demonstrated in gold ETF reductions) rather than them "believe[ing] the path of least resistance is higher for gold." Having said that, I wouldn't say it is necessarily bearish, as Gene is right in that it is a rare signal so could indicate a turning point. I just don't see it as a slam dunk bullish sign either, as this lack of interest in gold is likely to continue until people realise that, no, the economy isn't on the mend and the problems fixed. Until that mainstream narrative changes, we could see speculators testing the gold market to the downside.

Note: I have linked to a number of Nick's Sharelynx charts in this post. Just sign up for the free trial to get access to them, they are invaluable to understanding what is going on in the market, as hopefully this post demonstrates.

Email ThisBlogThis!Share to TwitterShare to FacebookShare to Pinterest
Labels: Hedging, How the industry works