The fact that Australia's Prime Minister referred to the global financial crisis as a "shitstorm" will probably just reinforce Americans' Paul Hogan/Steve Irwin view of Australians. Shitstorm is also the title of a book about that Prime Minister's first term and how close Australia came to financial disaster. In that book they cover the bank run that was developing at the time:

"It was a silent run, unnoticed by the media. Across the country, at least tens and possibly hundreds of thousands of depositors were withdrawing their funds. Left unchecked, there would soon be queues in the street with police managing crowd control ... It's a long time since Australia has had a serious run on a financial institution, but it's all about confidence, and you cannot allow an impression to develop generally in the public that there is any risk."

So how did the Australian government stop this bank run? Simples, they just told people they would guarantee bank deposits. End of run. I think it worked because the average Westerner can't conceive of a government becoming bankrupt. If pushed, the government would just print physical cash and send it to bank branches and take on the bank's assets and the average person would feel safe as long as they had that physical cash in their hands.

Now the holders of BB-unallocated are a step ahead of the average person because they hold gold, but the fact that they hold it with a bank tells you they still trust the system. Certainly if there was a fiat bank run, these BB-unallocated holders would request physical gold, but our focus here is if/when and how would a gold run occur, independent of a fiat run.

As I said in yesterday's post, the opacity of the gold market works to suppress run dynamics but paradoxically, that lack of information also means that if a credible rumour can gain hold (ie a narrative develops) then the run will be fast and thus the BB system is more unstable than the fiat banking system in this respect, particularly as even the most naive investors knows you can't print gold.

My best guess as to what could cause these BB-unallocated holders to begin redeeming in large numbers would be multiple reports of failures to deliver. If that coincided with reports of coin shortages it would help. But it has to be multiple reports - this bank, that bank - around the same time. The one off reports/events we have had are not enough to trigger a mass redemption. The fact is people rationalise away such single events. I mean, look at MF Global - people are still trading futures and there has not been any uptick in deliveries vs open interest. I think it needs a clustering of multiple events, and it would help if some of those were picked up by more mainstream news/blogs.

Also, it would be necessary for a large number of people to redeem at the same time. I believe that the gold market is already experiencing a slow gold run, more of a gold walk or stroll. The fact that Perth Mint clients have been increasingly preferring allocated, that non-bank storage services are growing, and other anecdotal stories I've heard (plus a soon to be launched product we are working on with a big bank) show that more and more clients are withdrawing away from BB-style unallocated and becoming risk adverse.

However, the reason I spent so many posts on the structure of the BB system was to show that this slow shift is not a problem for the BBs as they can handle such a move between themselves and central banks - it gives them time to let their gold assets mature into physical.

It is important to note at this point that while BB engages in maturity transformation just like fiat banking, it is mostly short term in nature - BBs don't lend gold out for 30 year mortgages. Even at the height of the miner short selling, a WGC August 2000 report on gold derivatives stated that most of the global mine hedge book was concentrated in the first 4 years and did not extend past 10 years. Today we have hardly any mine hedging, as this chart from Sharelynx.com shows: 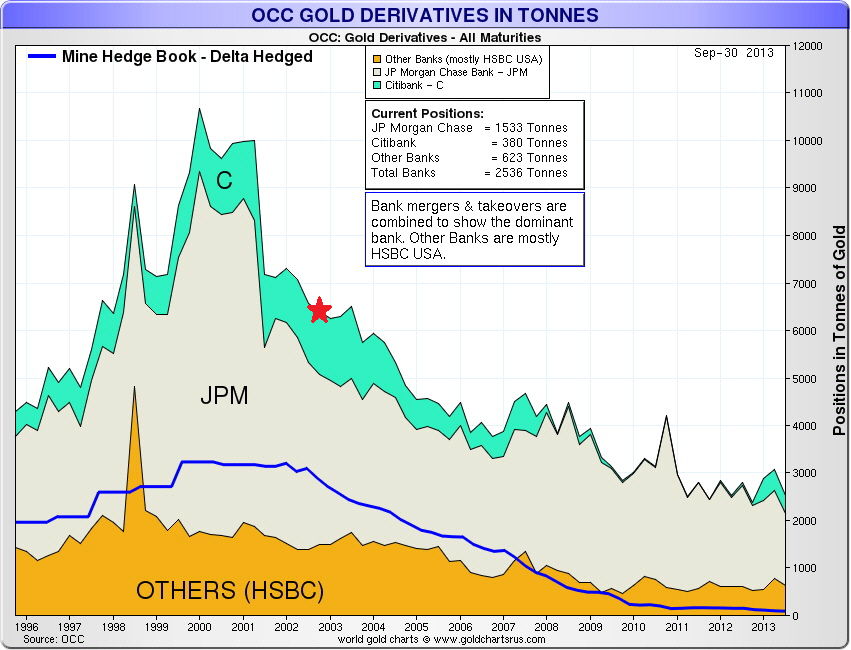 Note that the the blue line representing miner hedging is a delta hedged figure where as the OCC figures are notional. The notional miner hedging figure would be much more but I don't have any figures on it. Even so, it would not account for all of the OCC notional figure. The balance would be other short positions (eg Comex hedges, OTC forwards and options, etc) as well as gold lent to industry for inventory funding purposes.

So in a slow burn scenario, BBs can just let their gold leases mature. Indeed, the chart above shows that this is exactly what has been happening, with gold derivatives declining from 10,000t in 2000 to 2,500t today. If miner hedging is basically nil at the moment, what makes up the 2,500t and more importantly, how long is it lent out?

Obviously, part of those OCC figures would reflect Comex and other futures. But note the open interest in futures - there is hardly any volume outside the current contract. This indicates that most speculators are playing short term. As far as the OTC markets are concerned, note that GOFO rates are only quoted up to terms of 1 year. Again an indicator of where most of the volume is, in the short stuff. Finally, the Perth Mint's understanding of the extent of central bank leasing is that the majority, if not all, of it is for terms of one year or less.

The other significant part of the 2,500t figure would be lending to industry for inventory and consignment funding/hedging purposes. The WGC derivatives report estimated this at 1465t as at December 1999. Demand for gold is much higher today so, say, 2000t of gold tied up in refiners/mints/coin dealers (plus jewellery distribution and retailing) is highly realistic.

So my reading of the BB assets is that most of the short selling lending is very short term in nature and thus can mature quite quickly, in months. However, that which is lent to industry, even if terms are less than one year, are more ongoing in nature. While industry could liquidate inventory if lease rates rose (which they would if BBs were desperate for physical), that would not be overly quick, particularly as it would bump up against refinery capacity limitations and in any case, the industry needs a base amount of gold in process to function. So industry inventories can mostly be considered locked out in respect of meeting any BB-unallocated redemptions.

What the OCC chart does not tell us is the size of the unallocated pool and how much of it is backed by physical. In the WGC report, they estimate the total gold lending supply at 5,230t as at December 1999. Whether the OCC notional 10,000t would delta hedge down to 5,230t I don't know, but for our purposes whether the WGC estimate is understated is not as relevant as the estimate that only 520t of that lending came from non-central bank sources - 10%.

With the gold bull market there is no doubt that unallocated balances have increased but if this ratio of central bank to investor lenders then BBs don't have much risk of a run as private investor are only a small part of their borrowings and may be able to be met by repayments from their short term gold loans.

The other interesting data point is the red star in the chart above. That marks the date when BBs started to charge professional investors for holding unallocated. It is not coincidental I think that this happened after the amount of derivatives and mining hedging peaked and started to decline. I also coincides with the beginning of the gold bull market. Why would BBs start to charge a small fee on unallocated, thereby discouraging it? They would if they were facing two trends:
The result of these two trends would be increasing amounts of physical gold that the BBs had to hold against their unallocated. If you had OCC derivatives declining by 7,500t but as the same time increasing unallocated balances, then there is no one to lend that unallocated to and the only way to cover it is to hold gold. This increases your costs and thus the need to start recovering some of that by fees. I would note that the fees are in basis points and quite small, so this whole thesis is speculative and possibly overstated. Nevertheless, beginning to charge for unallocated is an interesting data point that should be considered.
Now the picture painted so far is not one which leads to much chance of the BB system being caught out by a slow run. It is possible as well that BBs may be running a much higher amount of reserves against unallocated than many would consider possible. However, I think that this series of post has shown that the BB system is still quite vulnerable. We will discuss that further tomorrow and how central banks may respond to a gold run.
Posted by Bron Suchecki at 13:38