Coin shortages and rationing are in our future

It seems not much has changed, with recent reports that the UK Royal Mint ran out of 2014 Sovereign gold coins due to "exceptional demand", as well as the continuation for over one year of an allocation program first put into place early 2013 by the US Mint on its ever popular silver Eagle bullion coins.

While these recent events have been limited to specific coins, with availability of other leading bullion coins like the Perth Mint’s gold Kangaroo not affected, it does seem to indicate that worldwide minting production capacity is still unable to meet demand surges. I have been talking about this issue for some time, as in this July 2012 interview and here.

The 2008 global financial crisis did result in private and public mints expanding their production capacity. The Perth Mint, for example, has spent over $50m since 2008 on improvements to existing machinery as well as new and expanded facilities.

However, it is little appreciated that the bottleneck in the global coin minting process is blank (planchet) manufacture. This is a far more complex process than simple stamping of a coin, particularly around purity and accurate weight control. As a result, blank manufacture is a process that benefits from economies of scale and thus few mints these days make their own blanks, outsourcing the process to a limited number of private and public suppliers, of which the Perth Mint is one.

If you dig deep, you will find that many of the coin supply problems come from underestimation of demand and the resulting exhausting of blank inventories. Often, blank suppliers are mints themselves and can face conflicts where they earn more by prioritising blanks for internal use rather than supply externally. Running higher blank inventories is often not an option, due to the cost of funding the high dollar value of the inventory.

To get an idea of how high coin premiums can go when coin demand overwhelms production capacity, consider this chart from Nick at www.sharelynx.com 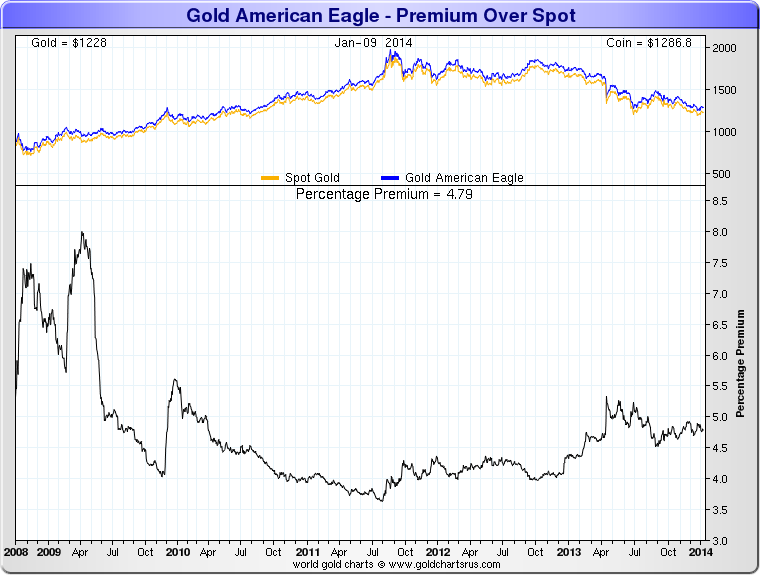 The 2008 premiums were celebrated by some at that time as a proof of a physical-paper price disconnect and a "good thing". The fact is that there was plenty of supply of the raw gold or silver (the Perth Mint at one stage was shipping in 20 tonnes of silver each week for weeks on end from London with no problems). High premiums are actually not a good thing, because it means that the same money buys (and takes off the market) less ounces.
Notwithstanding the capacity expansion by blank suppliers over the past five years, in my opinion there is no way the industry can meet the demand that would occur were precious metals to see even a small bit of interest from the mass market. While cast bars are a lot easier to make and refiners have much more casting production capacity, I am not even sure if it could meet sustained mass market demand.

For now 2008 style shortages and rationing don't seem to be on the horizon but the fact that the UK and US Mint are having supply issues on a few of their product with metal prices at these low levels is an idicator that as prices rise and (re)attract investor interest, shortages and rationing may become a reality of coin buying life again.
Posted by Bron Suchecki at 16:57

Email ThisBlogThis!Share to TwitterShare to FacebookShare to Pinterest
Labels: How the industry works, Shortages