I would argue that gold has a higher standard of disclosure compared to a central bank's fiat activities because if lost, say by the bankruptcy of a lease counterparty, physical gold cannot be printed out of thin air.

Now you may argue that I am being unrealistic, pointing to GATA's freedom of information lawsuit against the US Federal Reserve, or the IMF's 1999 weakening of central bank gold reporting requirements, as examples of central bank opacity. I agree that it is a difficult ask, but in both these cases either the detail sought, or the reporting frequency, opens up lines of arguments that can be used to muddy the waters and give plausible grounds for refusal.

I would argue that one does not deal with bureaucrats as one would in a commercial negotiation, where you go in with your highest (or lowest, if buying) offer, as that just opens up many points for refusal. It is better to go in with your strongest argued case, which will often not be exactly what you want, because it give much less wriggle room, and thus the best chance of success. Secondly, bureaucrats can have an arse covering herd mentality, so appeals to precedent are always useful as no bureaucrat wants to strike out on their own lest they get it wrong.

Given the above, I would propose that the best way to approach central bank gold reporting is to simply argue that central banks follow the accounting standards, that normal commercial organisations do to, when producing their annual reports.

Simple and reasonable. It is also difficult to argue against as central banks, via their oversight and regulation of the financial system, impose those accounting standards on others. It is also hard to argue against it on the basis that it would be market sensitive, as it is only being disclosed once a year and many months after the balance date of the annual report. As a result, one could interpret a refusal to do so as hypocrisy and an indication of something to hide.

You may wonder if this will achieve anything with respect to physical versus leased gold. By way of example, I offer the Reserve Bank of Australia (RBA), which also provides you with a precedent. The RBA has, at least since 1998, been reporting physical gold, gold leases, the duration and risk profile of those leases, and average lease rates, all to accord with Australian Accounting Standards.

For example, an analysis of the RBA annual reports allows us to produce the chart below, which shows how much of Australia's meagre 80 tonnes was held as physical and how much was leased out for which terms. 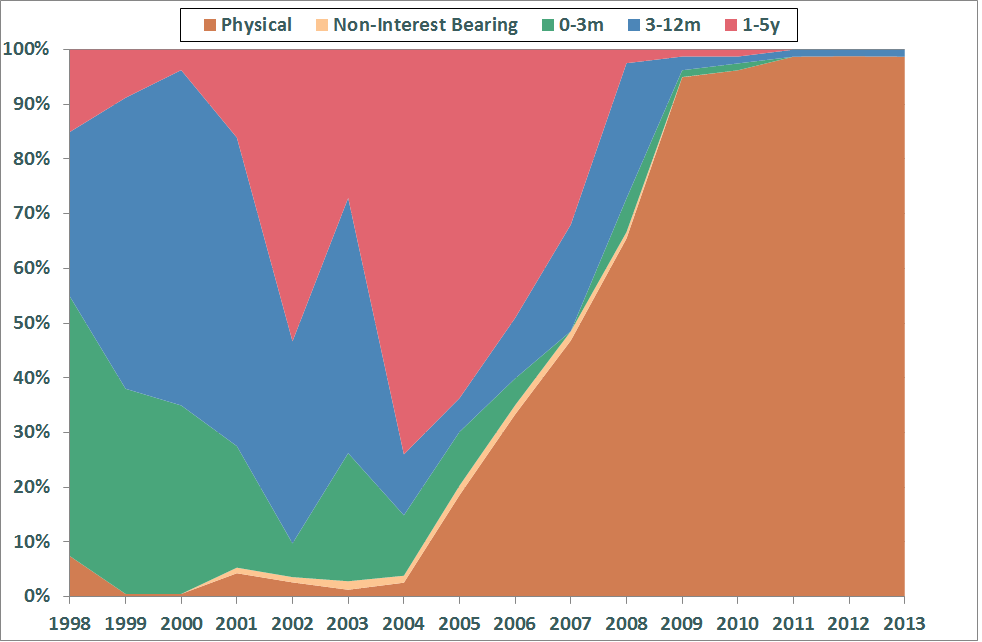 It is clear that the RBA started winding back its leasing after 2004, due I would argue, to the fact that lease rates by that stage had moved below 1% (and subsequently continued to fall), providing a poor risk/return tradeoff. We can also produce a breakdown of the credit rating of who the gold was leased to. 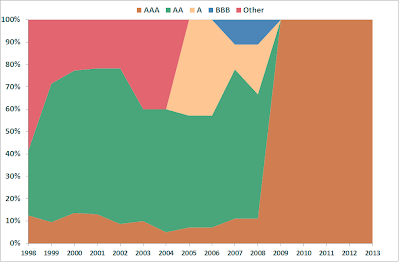 So we can tell from the above that the RBA is now only leasing 1 tonne of gold for a duration of between 3-12 months to an AAA rated counterparty. Such information, if provided by all central banks, would provide their citizens with the ability to assess how prudently their gold was being managed. It would also provide valuable information to the gold market in general.

So if it is good enough for the Reserve Bank of Australia to report this level of detail with respect of its gold reserves, I think it is fair to say it should be good enough for other central banks.

Technical Note: In point a) I referred to "leased (physically, not book)". The reason is that there is a difference, in terms of whether gold is at risk of counterparty failure, whether a lease involved actual physical shipment to the borrower, or whether it was just leased by way of a book entry with the physical gold remaining in the possession of the central bank.
Thus when looking at gold reserves in terms of its last resort use, if gold is leased by book entry then it is arguable that there is no risk as, in case of a war for example, a central bank can just extinguish the paper claim by the counterparty and retain the gold.
The extent to which central banks have lent gold physically or only via book entry to bullion banks and the different implications of those two methods for the stability of the fractional reserve bullion banking system and its run-proofness is another topic altogether, and one I can cover in another post if anyone is interested (stupid question, of course you do).
Posted by Bron Suchecki at 16:12