This theory was emailed to me by a reader and I thought it worthy of a wider audience. The chart below shows the WGC's estimates of supply of scrap inside India. Note the sudden increase in the third quater of 2013, which is significantly above the usual amount. 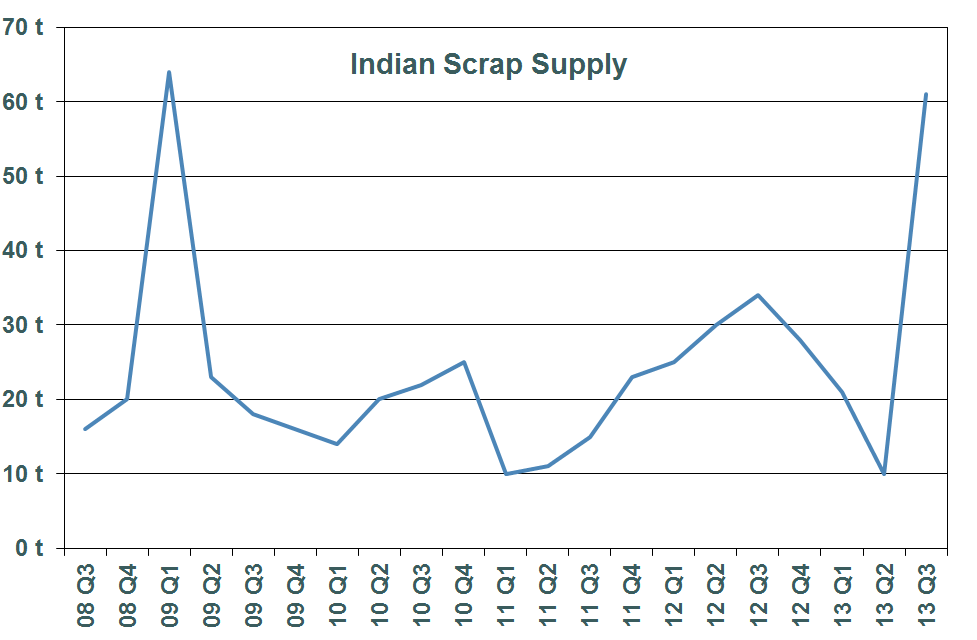 The last time this amount of scrap came into the market was in Q1 2009. The WGC explained at the time this way:

"When the gold price initially spiked in late 2008/early 2009, the local media were talking of a sizeable correction (not just in rupee terms, but also in $US terms). This is a key reason why recycling activity was so strong at that time - local scrap dealers reported queues stretching for blocks. The magnitude of this selling back reflected a belief that the jewellery could be repurchased at more attractive price levels at a later date."

With the gold price at lows, and gold hard to to get in India, I can't see there being a similar motivation for Indian's to sell their gold this time. Therefore my readers theory is that:

"Indian Jewelers will not want the Indian Government to think their gold import tax policy is not working. Thus, gold purchased from smugglers will be increasingly reported by jewelers as Scrap/Recycled and they will report record demand of Indians turning in their old jewelry to be updated to new, fashionable designs."
I find this explanation compelling, considering that a jeweller acquiring smuggled gold needs a cover story to explain how they got that gold, and claiming it was scrap is a good (and unverifiable) way to do that.
I will be interesting to see the amount of Indian scrap the WGC reports in their Q4 2013 Demand Trends report when it comes out in a couple of months.
Posted by Bron Suchecki at 17:14