The Mystery Of The Missing Australian Gold?

Has the Reserve Bank of Australia lost some of its gold reserves? Martin North of Digital Finance Analytics implies as such in The Mystery Of The Missing Australian Gold where he "discuss[es] the current state of Australia’s Gold holdings, and where 11 tonnes may have gone" with economist John Adams and then raises questions about the audit of Australia's gold in a follow up YouTube.

As is the case with most clickbait type headlines, the gold isn't missing nor is it a mystery, but that doesn't mean John hasn't raised valid questions. I will first address some misconceptions raised in the videos then discuss the audit.

At 15:50 John talks about the bars having a serial number and "emblem of the nation" and that the "Australian crest" will be stamped on the bar. This is not the case. The global standard for bullion traded in the professional gold market is detailed here and requires that bars are stamped with the brand of the refinery that made the bars, a serial number, purity and year of manufacture. Bars do not have any markings indicating who owns them and indeed anyone asking for physical allocation will usually receive a mix of bars from different refineries, as long as they are on the accredited list.

At 18:28 John discusses the interest income of $710,000 the RBA received on leasing out its gold and calculates an effective rate of 0.12%. This calculation is not correct as he is using the 30 June balance when the amount leased during the year may have changed. The RBA annual report does actually provide an accurate "weighted average effective lease rate" on page 177, which for 17/18 was 0.15%.

John and Martin then go on to discuss how this rate is non-commercial and compare it to the treasury 10 year rate. In the chart below I have graphed in blue the average rate reported by the RBA in its annual reports since 1998. 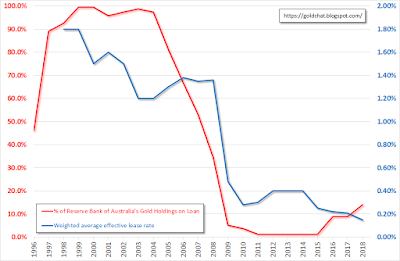 While 0.15% or even 0.40% may seem low to those outside of the bullion markets, they are reflective of gold lease rates in general, which are available here. The chart below is from that link and shows the derived (ie LIBOR - GOFO) gold lease rate for a lease of 6 months duration (note that the chart stops in 2015 as GOFO benchmarks ceased that year and full lease rate data is only available on paid subscription sites with some derived data being produced by Monetary Metals for free if you sign up). 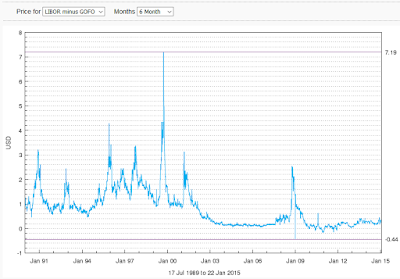 Having said that, the 0.15% in my opinion is too low notwithstanding the RBA is lending on a collaterised basis or to entities with "government support". The red line on the previous chart shows that the RBA was pretty much lending out all of Australia's gold reserves prior to 2005 but sharply pulled out of the market as its longer term (1-5yr duration) leases matured (see this post for charts on the RBA's gold lease duration mix) into a market where lease rates were sub 0.40%. It clearly didn't think the risk/return tradeoff was right at the time and that was prescient considering the GFC hit in 2008. If the RBA is willing to increase its gold leases at 0.15% it must now consider everything has been fixed and financial risks are low!

At 21:50 John talks about what he calls the linchpin question, which is whether the RBA will accept repayment of the lease in non-physical form. If yes, then he believes this means that Australia's 11 tonnes of leased gold has been melted down and this I think is where he gets the idea the gold is "missing". I was intially puzzled at John's logic until I realised that he is probably being confused by the gold industry's use of the term "lease" and naturally would assume a common meaning, that is, that leased goods shoud be returned after use.

When one sees "lease" in terms of gold that really just means "loan" and as with money (assuming someone loaned a person physical cash) the borrower does not keep the physical money but uses it for whatever purpose they sought the loan. In the case of the gold market, central banks generally do get back physical when a gold lease matures, but it isn't the same bars they lent - just as a borrower doesn't (can't) return banknotes with the same serial numbers. As discussed in this post:

"In the case of lenders supplying actual physical bars (usually only be Central Banks) because it is understood that leased metal will be "used" (be that in a physical operation like a jeweller or mint, or for sale to create a short position), the contract cannot practically require the return of the same physical bars that were lent (ie the same bar numbers). If the lease contract was worded on a secured basis (most likely where the borrower is a jeweller or mint) the security would have to be against the general gold stocks of the borrower rather than the bars originally supplied as it is understood that the original bars are melted or sold."

On this point, I think John and a lot of people leaving comments about the RBA leasing gold are like the crowd in the Simpson's take on It's a Wonderful Life.

In John's second YouTube he gets stuck into the RBA's audit of Australia's gold reserves at the Bank of England, tipped off by the work and FOIs of Bullion Baron (see this and this post for the background). John makes a number of valid points, the primary one being that it is not a real audit if the RBA is not able to randomly sample from its bar list without direction/limitations by the Bank of England.

John's issue with the Bank of England limiting the scope of the sample is that it enables them, given the 6 weeks notice the RBA gives, for the Bank to get bars manufactured with the required serial numbers (which it would only have to do if the Bank has been leasing/selling the RBA's gold without its permission).

This scenario is actually close to impossible given how the global refinery accreditation and manufacturing process works. Refineries number bars sequentially, with some numbering since they started refining while others restarting numbering each year (which is why the standard quoted earlier requires year of manufacture on the bar). The entire industry relies upon (and continually audits) refineries to ensure the integrity of the "good delivery" system, as without it global gold trade would break down. Sequential numbering is also a key internal control within a refinery.

It is impossible for the Bank of England to call up more than one refinery (as given the way vaults operate and bars allocated, bar lists usually contain bars made by many refineries) and ask for bars to be fabricated with retrospective numbers. The number of people involved in each refiner from the lowest levels plus internal audit/control to perpetuate this level of fraud makes it unlikely to occur, let alone remain a secret.

Having said that, John misses the key control breakdown identified by Bullion Baron which is that the Bank of England has it own numbering system and it is an open question from the FOI documents whether the RBA was just given this number or the actual serial number on the bar, as the RBA refused to provide this information. If the former, then this mean the Bank could just find a bar of similar weight (difficult but not impossible given the Bank stores 416,000 400 ounce bars) and say this matches their internal number. It is only the actual serial number stamped on the bar, in conjunction with year and refinery, that uniquely identifies a bar.

While the RBA is one of the most transparent central banks in respect of reporting on its gold reserves, Bullion Baron's FOIs reveal that they dropped (still drop?) the ball in respect of managing Australia's gold reserves. A case of 1900s "Mother Country" deference-type attitudes or maybe just because Bank of England is seen as one of the "central bank club" and so you can trust your "mates" to do the right thing?
Posted by Bron Suchecki at 16:00