Brian Kelly (founder and CEO of Kanundrum Inc, a private investment firm and research boutique) recently posted an article on Seeking Alpha called Misinterpretation of Gold Lease Rates and Why Gold Could Rise. In the article he says that “lease rates reported in the press are a derived rate and actually represent the amount that can be earned from the gold carry trade” and goes on to posit a relationship between lease rates and gold prices. Unfortunately it is Brian who has misinterpreted lease rates, and has done so quite badly.

The gold carry trade involves borrowing gold at, say 1%, selling the gold, and then investing the cash at, say 3%. If the gold price doesn’t change, you earn a net 2%. The bigger the net difference the more carry trade return you can earn (assuming a stable price) and therefore more attractive short selling of gold should be – as long as there is an expectation that the gold price won’t rise too far to wipe out the profit from the interest rate differential.

Regrettably for Brian, it is GOFO, not the Lease Rate. How can I be so sure? Well when I worked in the Perth Mint’s Treasury and we borrowed gold, we were charged the Lease Rate, not GOFO. But don’t take my word for it. I quote from a booklet titled “A Guide to the London Bullion Market” issued by the London Bullion Market Association (who you would think would know what they are talking about): “Forward rate = Dollar interest rate – metal lease rate”

As a result not much store should be put to Brian’s subsequent analysis about the relationship lease rates and the gold price. The chart below shows the relationship between the real “carry trade” indicator (I’ve chosen the 6 month GOFO rate) and the spot price. I take a more longer-term strategic view and looking at the chart there is no clear relationship or correlation that I can work with. For example, in 2002-2003 GOFO was low and the gold price rising. But 2004-2006 GOFO was rising but the price also went up. I don’t see any tradable signals one can rely on. 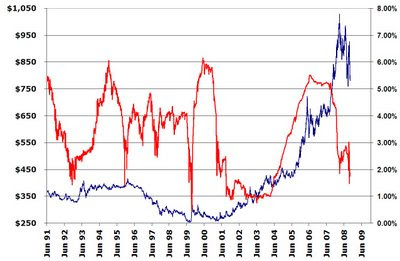 Brian has also developed what he calls the Kanundrum Model of Markets, which explains the way people and markets behave. Below is a summary of his key “stages”:

Stage 1 of any emerging trend is first characterized by a change in direction. It is usually preceded by a surge in volume as the asset makes a new low. This is the stage where major investors are establishing new positions.

Price begins to retreat from the unbelievable prices achieved during Stage 3. However few participants are concerned. Market participants are accustomed to the asset price and many investors use the pullback to add to or establish new positions.

The price begins to move back up and individual investors invest. The price moves may be less than during Stage 3 primarily because individuals do not have the buying power that larger professional investors have. As well, Stage 1 and Stage 3 investors are taking profits.

In this blog post dated 13 October, Brian believes that gold is currently in Stage 2: Disbelief/Confusion. Now I’m not so sure about his model and the stages one has to choose from but it is an interesting and fun way to view the market. Using his model, I would suggest we are in the middle of Stage 4 (see chart below). What stage do you think we are at? 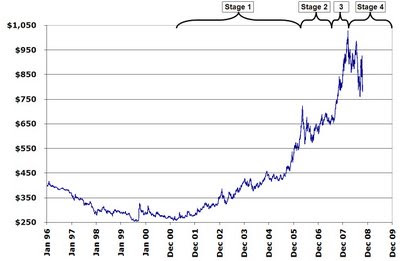