Warning: this post is wonkish, those who get annoyed at nit-picking or ambiguity should stop reading now.

Thanks to the beneficence of 19 gold miners, every quarter the World Gold Council (WGC) provides free of charge its Gold Demand Trends report. Despite the inclusion of "manager" in my highfalutin title, I don't actually manage any data monkey lackey staff so for years I've keyed in the Thomson Reuters GFMS sourced supply and demand figures from the report into a spreadsheet myself.

As part of their report, the WGC provides a table of supply/demand figures not just for the current quarter, but also for 2 years worth of prior quarters, so one can see the trends in the figures. What I have noticed is that with each report the figures of the prior quarters change. To see what I mean consider the image below. 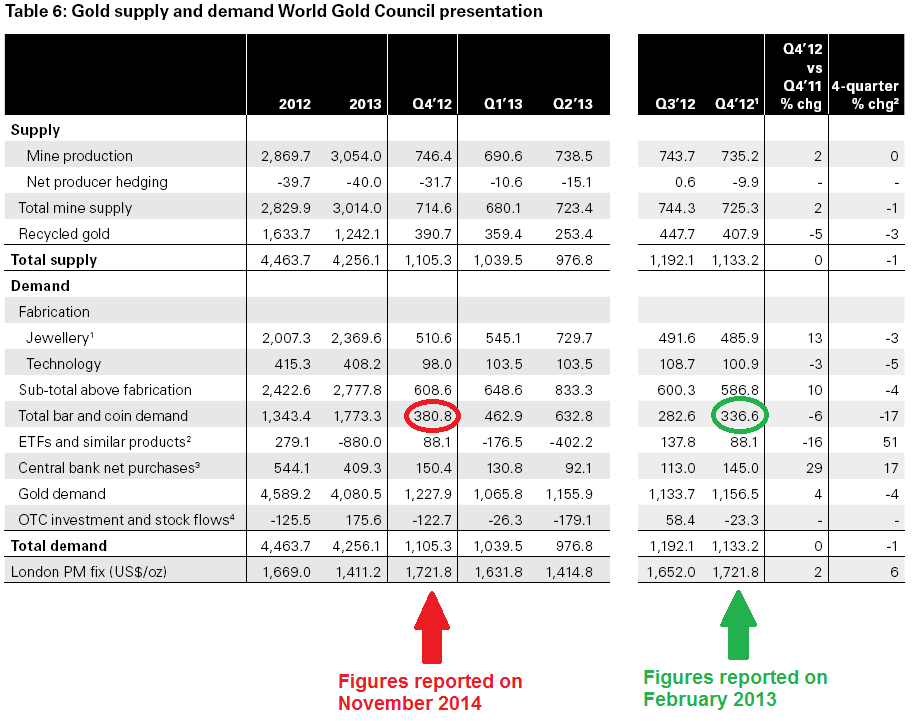 On the right are the figures for Q4 2012 as reported on February 2013. I've highlighted in green the 336.6 tonnes of bar and coin demand. On the left is part of that same table from the November 2014 report, from which you can see that the Q4 2012 bar and coin demand is now being reported as 380.8 tonnes. This means the originally reported figure was 13.1% lower than the now more accurate figure. If you compare the two columns you can see that almost all the figures are different.

Now you may think that I have cherry picked a particularly bad example but this sort of variance is not unusual. Below is a table that compares the originally reported figures with the latest figures the WGC reports, showing how much in percentage terms the original figures were under/over to the more accurate later figure (I have focused here on those categories which are more significant from a tonnage point of view). 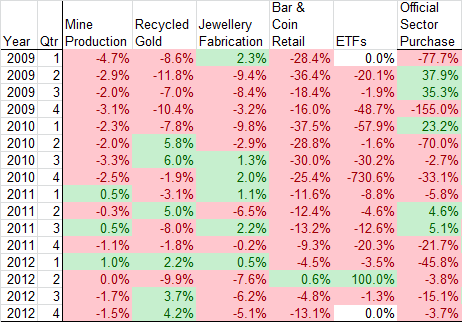 These sort of variances really shouldn't be a surprise - the global gold market is large and opaque and so to come up with figures within a month inevitably estimation is required. As various country statistical and customs departments release official figures GFMS would be able to cross check that with their other sources and surveys and revise their initial estimates accordingly. As governments aren't known for speed, continual revision of the figures is required. What is interesting is that it appears GFMS consistently underestimate the figures (being conservative).

Some additional comments (keep in mind these figures are global, so getting numbers across the entire world isn't easy):
I'm sure this has fundamentally affected your life and view of the gold market - no need to thank me. Now back to my spreadsheet cave.
Posted by Bron Suchecki at 19:33

Email ThisBlogThis!Share to TwitterShare to FacebookShare to Pinterest
Labels: Statistics