Sprott PHYS fund redemptions show up in the first few days of a month, and for March there were no redemptions. This lack of news is actually news as it confirms for me that the redemptions we have seen in the past (see here) were driven by an arbitrage opportunity.

Below is a graph that demonstrates this. First I took the reported premium/discount to Net Asset Value (NAV) and subtracted the $5 per ounce redemption cost. This is graphed in green (for a profit) and red (for a loss) in percentage terms on the right hand scale. When it is green, you can make a profit buying PHYS shares at a discount to NAV, redeeming, and then selling the physical gold at the higher spot market price.

Second, I graphed the amount redeemed on the left hand scale and shaded the months during which the shares would have been accumulated to do the redemption. You'll note that the shaded periods run from the 16th of a month to the 15th of the next month. This is because you have to submit your redemption request to the fund by the 15th of each month to give the fund 2 weeks to process and get your gold ready for delivery by the end of the month. 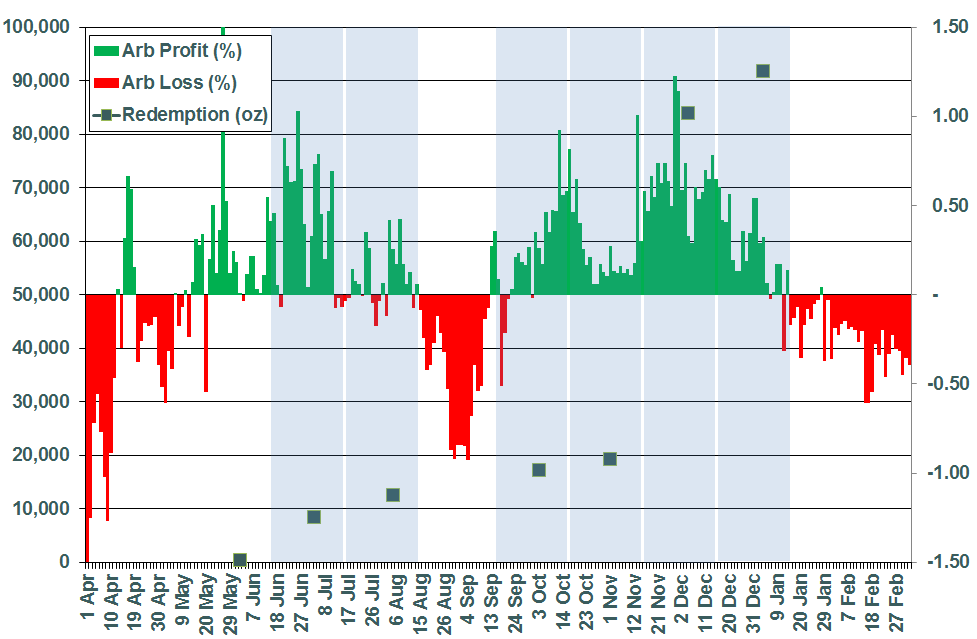 You can see from the chart that the redemption accumulations only occur when there is an arbitrage profit to be had and cease when there is no profit.
PHYS first started to go into discount during April 2013 (prior to that it had always traded at a premium). However, while there was some arbitrage profit in May/June, that month only showed a redemption for 400oz. I think this is explained by the fact that PHYS was only showing small discounts to NAV and a trader or bullion bank first wanted to test the redemption process before redeeming in bulk. Hence they redeemed exactly one LBMA bar - not coincidental I think and strongly suggestive of a test transaction.
As the discount persists into the Jun/July and July/August periods we see the trader ramp up the redemption quantities. I note that as a percentage of PHYS' trading volume for those months, the units redeemed were only 0.6% and 1.6% respectively. That is quite low. August/September presented no arbitrage opportunity so we don't see any redemptions.
But in September/October and subsequent periods, the discount (and arbitrage profit) reappears and we see the redemptions increase. Note that while the next two redemptions are similar in ounces to Jun/July and July/August periods, due to lower trading in PHYS they represented 12.1% and 16.5% of trading volume respectively. This is getting quite high but the buying of PHYS did not drive PHYS back into a premium, so in the next two months the traders must have felt more confident and really ramped up their buying to the 3 tonne level, and at 28.9% and 30.1% of PHYS' trading volume in November/December and December/January respectively.
I am wary of ascribing causality here, but do wonder if this high level of buying relative to the number of shares of PHYS that normally trade did result in the fund returning back into a premium to NAV from January onwards. That is what arbitrage in theory should do.

I would note that the redemption activity we see may not be an arbitrage trade (that is, someone just looking to pocket the different in prices) but also a physical investor who is not interested in holding a fund and just sees PHYS as offering a cheaper way of getting physical. In either case the result is the same.
I'll keep track of this data and post if there is any action that further confirms, or contradicts, the theory that a trader or investor is opportunistically taking advantage of PHYS trading at a discount to NAV.
Posted by Bron Suchecki at 17:15