This article by Ambrose Evans-Pritchard in the London Telegraph has got a lot of runs in the past few days. This statement in it caught my eye

Low real interest rates have caused the process [mine hedging] to reverse, creating a shortfall of about 500 tonnes. The process accelerates as rates turn negative, leading to a scramble by market players to find physical gold.

My understanding of what drove mine dehedging was that investors were demanding no hedging so they could be fully exposed to the gold price. I didn't think real interest rates had anything to do with it. I was intrigued that maybe Charles Gibson of Edison Investment Research had found some correlation, so I dodged up the following chart, creating the real interest rate figure from the federal funds rate less CPI. 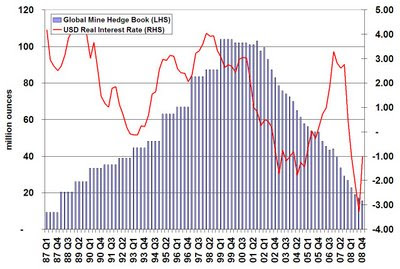 I can't see any correlation at all between the consistent miner dehedging and real interest rates. I think there must have been some misinterpretation by the journalist in trying to simplify the report into a brief news article.

The other statement that "this is what occurred in the late 1970s, driving gold prices to $850 and ounce" I would also disagree with. As you can see from the chart, mine hedging really only got going in the late 80s. I am speaking without direct experience but I don't think there was much, if any, lease market in the 70s/early 80s. Maybe it was meant that the forwards/futures machinery was upset in the late 1970s.
Posted by Bron Suchecki at 14:18