I have been following the London Banker blog for a few months. He is reposting some older comments he did on another site and in his
Famine Futures: Deregulated Markets and Food Insecurity I found this reference by him to a Bloomberg new article in April 08 of interest:

The divergence between CBOT futures and the underlying commodity is so great that some grain merchants have stopped bidding for new crops, said Niemeyer, a member of the National Corn Growers Association board. Others won't guarantee a price for more than 60 days. ''We have a fundamental problem with the markets,'' said Kevin McNew, president of researcher Cash Grain Bids Inc. in Bozeman, Mont., and a former Montana State University economist. ''It is very difficult to operate a grain business when the cash prices are below the futures'' by such a wide margin, he said. The price gap should converge when futures contracts expire and deliveries are settled. Instead, the average premium for CBOT wheat has quadrupled in two years to 40 cents a bushel, compared with 10 cents the prior five years, McNew said. For James McReynolds, who farms 2,000 acres of wheat outside Woodston, Kan., futures aren't worth the risk. ''The differential of what the market should be and what you can actually sell is so far out of line that you aren't willing to do it,'' McReynolds said. ''This is a tough situation. Agriculture is not as healthy as we'd like to think it is.''

London Bankers also notes: Mr Frankfurter reviews the history of “securitized commodity products” and the development of commodities as speculative investments, distinct from their role in production and consumption within the economy. He suggests that something “systemic and possibly more insidious” has altered the benign role of speculators as providers of market liquidity and ties this change to the ill transparency of OTC derivatives arising from The Enron Loophole.

This is also what is happening to gold. This is not to deny any possibility of central bank intervention/manipulation, but just to acknowledge that speculators are also a factor. As a result, I see the spike in gold to $1000 as an aberration, a false dawn. The chart below (from my 29 Oct 08 post) shows that the $1000 run up was way off the multi-year base trend from 2001. Where gold is now is probably where is should have been all along, if not lower. In any case such trend analysis is now mostly redundant as we are in a new investment paradigm - wealth protection, not wealth accumulation - and the scale of this credit crisis means we have no real history to work from. A brave new world for gold. 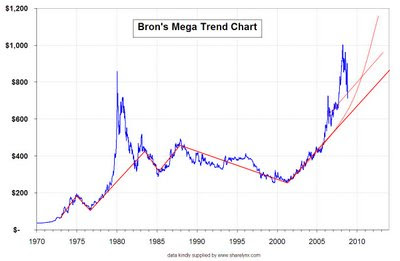