Every quarter www.gfms.co.uk release their Global Hedge Book Analysis. I've been tracking it for a while now as it makes for a very interesting chart (see below). Quarter 2008 report was released last week. 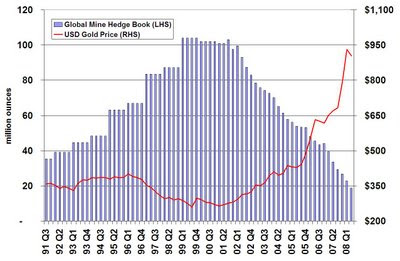 Seems to be a very strong correlation between the decline in the hedge book (producer de-hedging creates demand for gold) and the rise in the gold price. "What," you say, "the increase in the gold price is not entirely due to the fall in the US dollar and the massive huge demand for US Eagle coins?" Yes, that is correct apprentice goldbug, things are not a simple as some ranters, sorry commentators, would have you believe.

1. De-hedging cannot continue forever, it is the lowest it has been since 1987, as it runs down to zero it will remove a source of demand that has been there since 2001.
2. When sentiment changes and producers decide to hedge again, watch out.

Maybe this recent fall has been exacerbated by a miner deciding it is time to lock in these historically high prices? Maybe not. Either way they aint gonna tells anyone beforehand and once the announcement is out, it isn't going to be pretty. About time market commentators started to analyse the statements of the CEOs of producers for hints of their intentions and provide their subscribers with forwarning.
Posted by Bron Suchecki at 08:26

Email ThisBlogThis!Share to TwitterShare to FacebookShare to Pinterest
Labels: Hedging